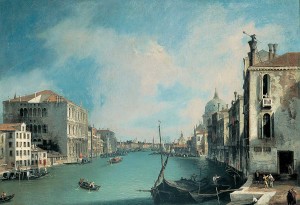 Canaletto became famous primarily for his city views and caprici of his home, Venice. The detailed representation of the houses, which as a result are easily identifiable, is particularly impressive. The right painting shows the Campo San Zanipolo (Venetian for Santi Giovanni e Paolo) in the north of the Castello sestiere. The Dominican church SS. Giovanni e Paolo was the preferred burial church of the Doges and the Venetian aristocracy. Next to it is the Colleone, an equestrian statue of Bartolomeo Colleoni, who was a military leader of the Republic of Venice. In the centre, the Scuola Grande di San Marco can be seen, a building from the early Renaissance in which a lay brotherhood was housed. There are several versions of most of his paintings; they can be distinguished from one another only in their details. A work very similar to this one can be found in the Gemäldegalerie in Dresden.