Complete archive
SHARE
Main Menu
We use cookies to enhance your experience when visiting our website. Learn more
Subscribe
John Constable (1776–1837) is one of England’s most celebrated painters. Together with J.M.W. Turner, with whom he shares a masterly use of colour shades to depict light, he contributed to the flourishing of 19th-century British landscape painting. Constable sought and found his motifs exclusively in his native environment, the county of Suffolk and the surroundings of Salisbury, Hampstead and Brighton. For his large-format paintings he made numerous sketches in the open countryside. Constable also influenced French Romanticism and the École de Barbizon.
By means of an ensemble from the Tate Collection spanning all of the artist’s creative periods, the show demonstrates how Constable’s art took its inspiration from a deep connection with the landscapes of his homeland. The works on display range from small-scale, quickly painted sketches to the largest of his expressive landscape paintings. In addition, examples of his small- to medium-format cabinet paintings, drawings, watercolours and engravings are on view. The exhibition is complemented by works by some of Constable’s models and contemporaries, many of whom were also his competitors: Paintings by Gainsborough, Turner, John Linnell, Benjamin West and others place Constable’s work in its context and illustrate how other artists depicted the English landscape.

During his years of study at the Royal Academy, John Constable absorbed influences especially from Old Masters such as Claude Lorrain, Peter Paul Rubens or Jacob van Ruisdael. Constable, who faced difficulties in finding a market for his pictures in his native Britain, initially received more attention across the Channel in France. In 1821 Théodore Géricault discovered his large format The Hay Wain in London, which won a gold medal at the Paris Salon in 1824. Eugène Delacroix took his cue from Constable’s handling of colour, and the Englishman’s works found numerous buyers in Paris.

The early death of his wife Maria in 1828 plunged Constable into deep mourning. Admitted to the Royal Academy in 1829, the painter devoted himself towards the end of his life to a busy lecture and teaching career, with a focus on landscape painting. Together with the engraver David Lucas, Constable began around the same time to publish 40 of his landscapes as mezzotint prints.

The early death of his wife Maria in 1828 plunged Constable into deep mourning. Admitted to the Royal Academy in 1829, towards the end of his life the painter devoted himself to a busy lecture and teaching career, with a focus on landscape painting.
With “John Constable’s English Landscapes”, Villa Vauban presents the first monographic exhibition on the artist in Luxembourg and offers the rare opportunity to discover works by this English classic on the continent – including the world-famous painting Salisbury Cathedral from the Meadows, about which Constable remarked that it embodied “the full compass” of his art. In addition, Villa Vauban’s permanent collection of European art from the 17th to the 19th century offers a variety of interesting cross-references to Constable’s landscape painting.

Organised in cooperation with Tate 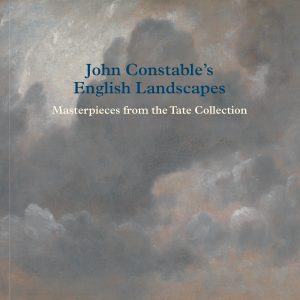 In the garden of the Villa Vauban there will be a refreshment bar with English-inspired snacks.

Under the name "John's Cottage", the chalet will also be part of the offer around the big exhibition on the famous English painter John Constable which, in collaboration with the Tate in London, will take place from 2 July to 9 October at the Villa Vauban.
Run by Ginger Head, the menu includes club sandwiches, scones, cheesecake, tea, coffee and (non-)alcoholic drinks.

"John's Cottage" is open from Wednesday to Sunday from 11 am to 5 pm continuously.

In order to fully enjoy the garden and nature, Villa Vauban offers picnic blankets to its visitors.

Discover our new cultural and educational program and be surprised by the exhibitions and activities from January to April 2023.

Currently on sale at the museum

A stroll through art. European painting and sculpture, 17th–19th century

< What's on at the Lëtzebuerg City Museum >